What exactly is happening in the east, and how does it affect us? 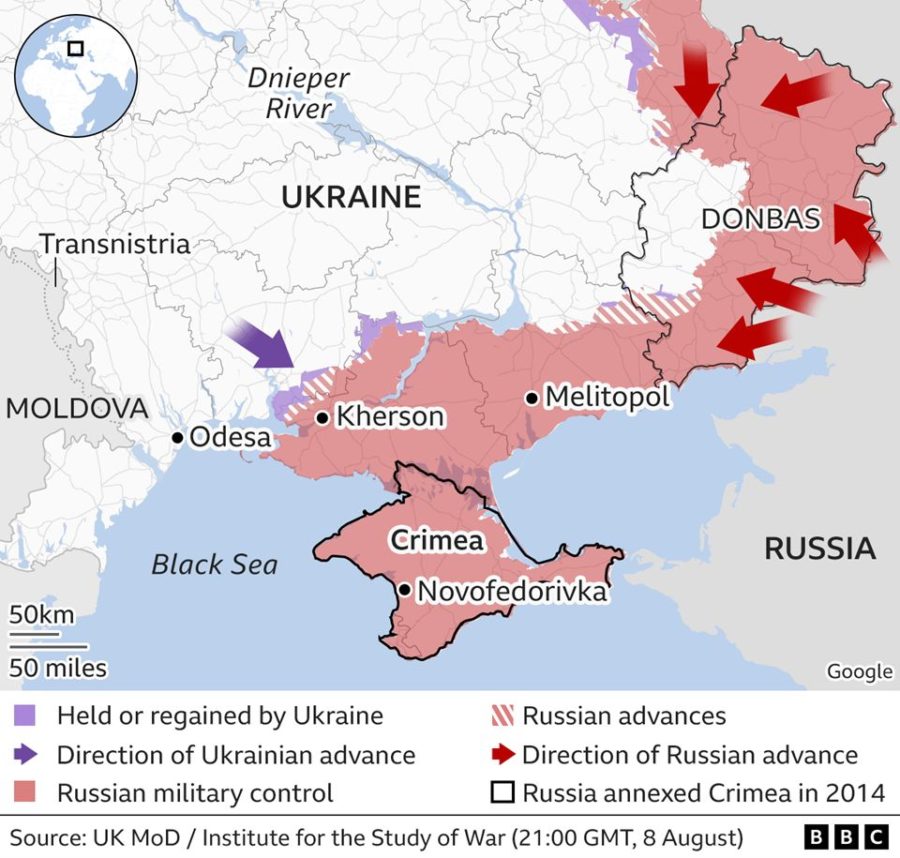 Parts of Ukraine controlled by Russian troops as of August 8, 2022

Surely most have heard of the dispute between Ukraine and Russia one way or another. However, the roots of this dispute started much earlier on then expected. Ukraine and Russia were once a sole country—the Soviet Union—although some other parts had been a part of other Slavic countries, it was mainly derived from Russia.

Now, the initial purpose of Russia’s invasion, affirmed by Vladimir Putin, the current president of Russia, was to overthrow the Ukrainian government in order to terminate Ukraine’s want of joining NATO (North Atlantic Treaty Organization). Yet this original goal has long since been abandoned, with the current goal being to take over Ukraine and overthrow the government to reestablish the Soviet Union.

As of August 31st 2022, approximately 7 million Ukrainian refugees have fled west to several countries that have opened up their borders, such as Poland, Romania, and Moldova or other countries throughout Europe. Battles continue to rage on with many cities destroyed by Russian bombings. But, President Zelenskyy of Ukraine is not letting up. There have been many controversial events going on ranging from various bombings, targeted health care facilities, and such. Not to mention, it is said that Russia is having a shortage of military personnel, and could potentially seek out convicted criminals to serve in exchange for pardons as stated on www.cnn.com, although nothing has been truly confirmed. On the other hand, the Ukrainian forces have successfully reclaimed several villages, and have launched several attacks on Russia. So, it is looking better for Ukraine’s side.

Russian troops have been occupying the Zaporizhzhia nuclear power plant, which has been agitating the people, fearing a nuclear disaster. In response to this, UN inspectors are traveling to the power plant to renew the shelling on the facility to eliminate any risks. Overall, there is much going on with both the power plant and the various battles going on between Russian and Ukrainian forces.

It is important for people to stay informed, even students at VMS. Staying informed is a responsibility even students should choose to initiate, and at least knowing what is going on around the world can give some sense of enlightenment. This is important because staying informed can help someone make an impact, although not necessarily major, there can be people who know or have relatives involved in events such as the Ukrainian invasion.